Who will make it to San Antonio?

With the college basketball season starting tomorrow, here’s a look at my projected picks for who will make it to San Antonio for a chance to cut down the nets on April 2, 2018. 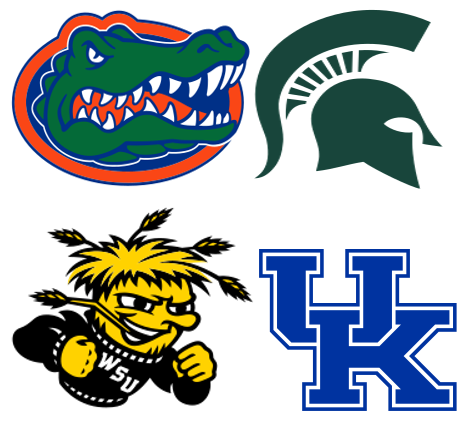 Why will these four make it to San Antonio?

Florida is coming off a run to the Elite Eight where they were eventually eliminated by conference foe South Carolina. Having been so close a year ago, Florida has the experience and the drive to make it to San Antonio in 2018. Mike White will look to senior Chris Chiozza and junior KeVaughn Allen to be one of the best backcourts in the country to get his Gators over the hump and to the Final Four.

Coming off of a rebuilding year after the departure of Denzel Valentine, Tom Izzo received news that his freshman phenom Miles Bridges would be returning to East Lansing with the goal of winning a national championship and becoming the Naismith Player of the Year. Bridges, a preseason All-American, is in a position to do both. With a veteran point guard and two former McDonald’s All-Americans returning for their sophomore seasons, the Spartans are poised to make a run deep into march.

In the past, the Shockers have “shocked” the nation and made deep runs into March, including Final Four appearances, most recently in 2013. Gregg Marshall has built the Wichita State program not only into a mid-major powerhouse, but also a force to be reckoned with on the national stage. After losing a tough second round game to Kentucky in the 2017 NCAA Tournament, the Shockers, behind sophomore point guard Landry Shamet, have a chance to make it back to the Final Four in 2018.

As usual, John Calipari will not begin the 2017-18 campaign with many familiar faces on the roster. With Malik Monk and De’Aaron Fox gone, the Wildcats have a new freshman class that is ready to play at high level and contribute right away. With eight new freshmen, including six five star recruits, the Wildcats will likely start five freshmen to begin the year. Although they may experience growing pains, Calipari always get his young caps primed and prepared for a deep run in March.

Here’s a look at my projected top four seed lines and how Florida, Michigan State, Wichita State, and Kentucky will make their way to the Lone Star State:

Based on the regionals being seeded as they are above, I would expect Florida to upset Duke and Michigan State to take care of Kansas. Additionally, Wichita State will play Cinderella (as a two seed) and beat Arizona, and Kentucky will gain revenge over North Carolina in the Elite Eight to advance to the Final Four. This would set up an SEC battle in the Final Four between Florida and Kentucky and another matchup between Michigan State and Wichita State. I project a hard fought national championship game between Michigan State and Florida. My pick to win the 2018 National Championship is the Michigan State Spartans, led by player of the year candidate Miles Bridges and head coach Tom Izzo.

View all posts by kyled3